UK construction companies recorded a sustained rebound in business activity during December, according to the latest PMI® data compiled by IHS Markit. Stronger order books helped to drive the recovery across the construction sector, with survey respondents often citing work on projects that had been delayed earlier in 2020.

Higher levels of demand led to a slight rise in employment numbers and greater demand for construction inputs in December. However, stretched supply chains and delays at UK ports resulted in longer delivery times and the fastest rate of input cost inflation since April 2019.

The headline seasonally adjusted IHS Markit / CIPS UK Construction Total Activity Index posted 54.6 in December, little-changed from 54.7 in November and above the crucial 50.0 no-change threshold for the seventh consecutive month.

Increased construction activity primarily reflected another sharp rise in house building during December (index at 61.9). Commercial activity also expanded (51.2), but the rate of growth eased to its lowest since the recovery began last June. Civil engineering was the weakest-performing category (48.0), with activity falling for the fourth time in the past five months. 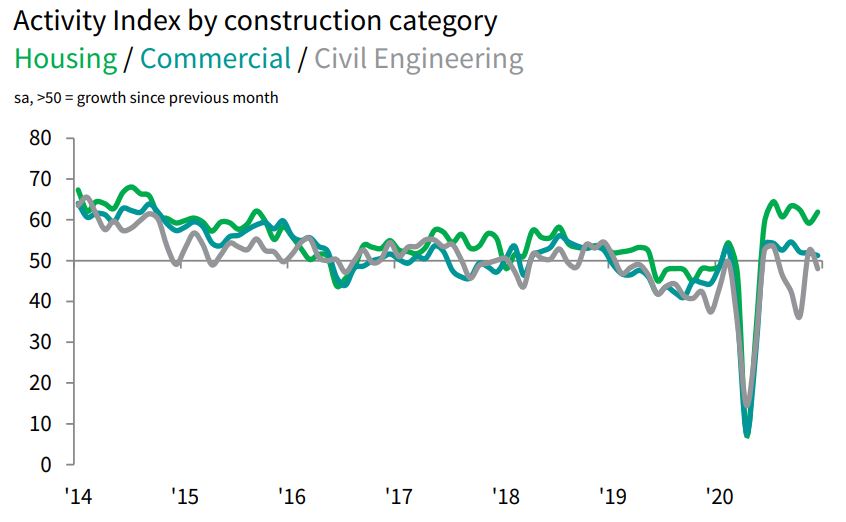 Total new orders increased at a strong pace in December, which extended the current period of expansion to seven months. Survey respondents noted improving client demand, alongside a boost from new business wins on construction projects that had been deferred at the start of the pandemic.

Rising workloads contributed to a sharp increase in purchasing activity at the end of 2020, with the rate of expansion holding close to November's six-year high. Some construction companies also cited efforts to bring forward input buying due to concerns about longer lead times among suppliers. The latest downturn in vendor performance was the sharpest since June 2020 and more marked than any seen prior to the pandemic.

December data indicated a return to jobs growth in the construction sector, although the rate of expansion was only marginal. Additional staff hiring reflected forthcoming new projects and improved confidence about the business outlook. Exactly half of the survey panel (50%) forecast a rise in business activity over the course of 2021, while only 10% anticipate a decline, which signalled the strongest optimism across the construction sector since April 2017.

Please agree to the conditions first